A Conversation with Benoit Furet 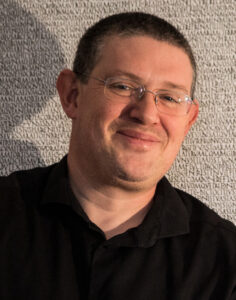 When was the first time you picked up a calligraphy pen?

28 years ago. It was an accident, I wanted to learn about Celtic knotwork and registered for a course including calligraphy & Celtic decoration. I ended up writing line after line of an uncial script and loved it. I left this course with the first lumbago of my life (tables were too low) & an addiction to calligraphy and knots. Since then, I developed several other addictions related to manuscripts.

What is the best advice you ever received (lettering or otherwise)?

“Don’t look at the model, look at the original source, the manuscript!”
Amanda Adams (with her husband Keith, they were my masters in my calligraphic journey)

Why do you letter? What keeps you coming back every day?

I want to add beauty to the world. The best way of doing it, as far as I’m concerned, is to calligraph texts that I love, bring them to light. The other motivation is to learn, discover new sources, manuscripts, scripts, abbreviations, ligatures… not to forget new materials, tools, techniques. Experiment, again and again, to broaden my skills.

“Draft knots I drew during my first year at the university (instead of taking notes) after discovering calligraphy, I have dozens of pages like that.” 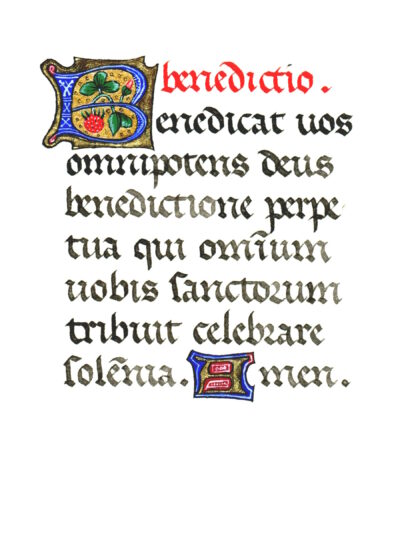 “Copy of a french missal from the XVth century, one of the very few copies I made.” 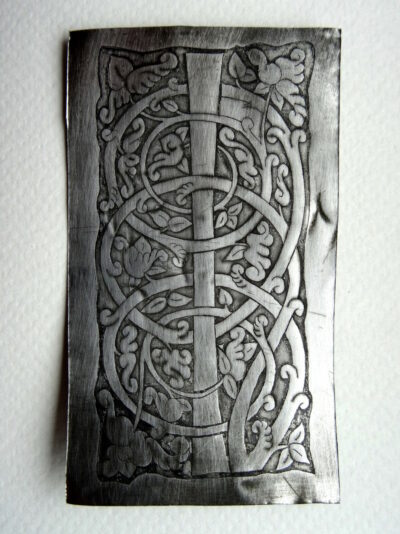 “My first electro-etching on tin (from a soda can), with a leaf missing in the top right part.”

What is your dream project?

Deepen my knowledge of filigrees until I can write a treatise on the subject.

What research do you do when learning or starting something new? i.e. a new style or new project.

Find sources, get to the roots.

Name 3 non-lettering artists who inspire you.

Leonardo da Vinci for the universality of his work
Émile Cioran (Romanian writer and philosopher) for the joy in despair
Dominique A (French songwriter & singer) for the permanent renewal of its creations with always the same attention to details. 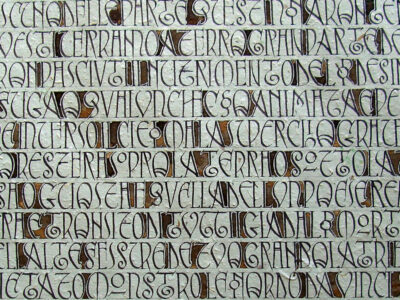 “Bit of a piece with a text from the Propheties by Da Vinci.” 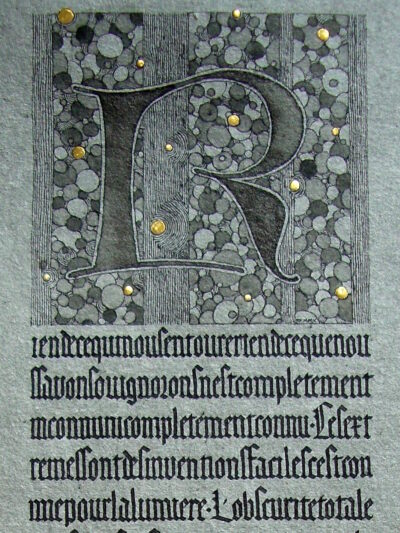 “Bit of a piece with a text on the duality obscurity/light which ends by saying : the only truth is penumbra.”

What do you aim to say with your work?

When I work on a text, I try, by the choice of the script, the composition, the colors… to inspire to the beholder an aesthetic emotion comparable to the literary emotion that I felt while reading.
No need to say that I usually fail.

Why do you teach? What is your teaching ethos/style?

I love to share my knowledge, my interest in letters, even (especially?) with people who are not interested.
I want my trainees to come out of my courses autonomous, able to have a critical look at their work. To achieve this, I use an analytical approach and break things down to the atomic level and then put the pieces back together. I rephrase, explain, demonstrate, until everyone understands. I don’t accept to leave anyone on the side of the road.

What is your favorite pastime when not in your studio?

Read a book while walking

What jobs have you done besides being an artist?

Yes, first because, unlike English, in French we have accented letters. As I mostly use historical scripts created before the 16th century that don’t have accents, it doesn’t make a big difference for me but people who try to read my works are often annoyed by their absence.
The real difference, and it’s the same with German, is the letter combinations. As an example, I could mention TH which is rare in French but more than common in English. This means that ligatures and abbreviations are also different. It’s a fascinating subject of study and I wish I knew more about English paleography.

“Draft of a text from the Aeneid, not modern, not old, just me & Virgil trying to find an agreement.”

We see you love Gothic Scripts. What place do you think they have in our modern culture?

They are sparingly used by brands to evoke high quality and/or longstanding. In a totally different context, they are widely used and customized in street art.
None of these uses correspond to my practice and I am not at all concerned with creating works that are a part of modern culture. As evidence of this, my pseudonym, Anachropsy, roughly translates as “the spirit that is not of this time”.